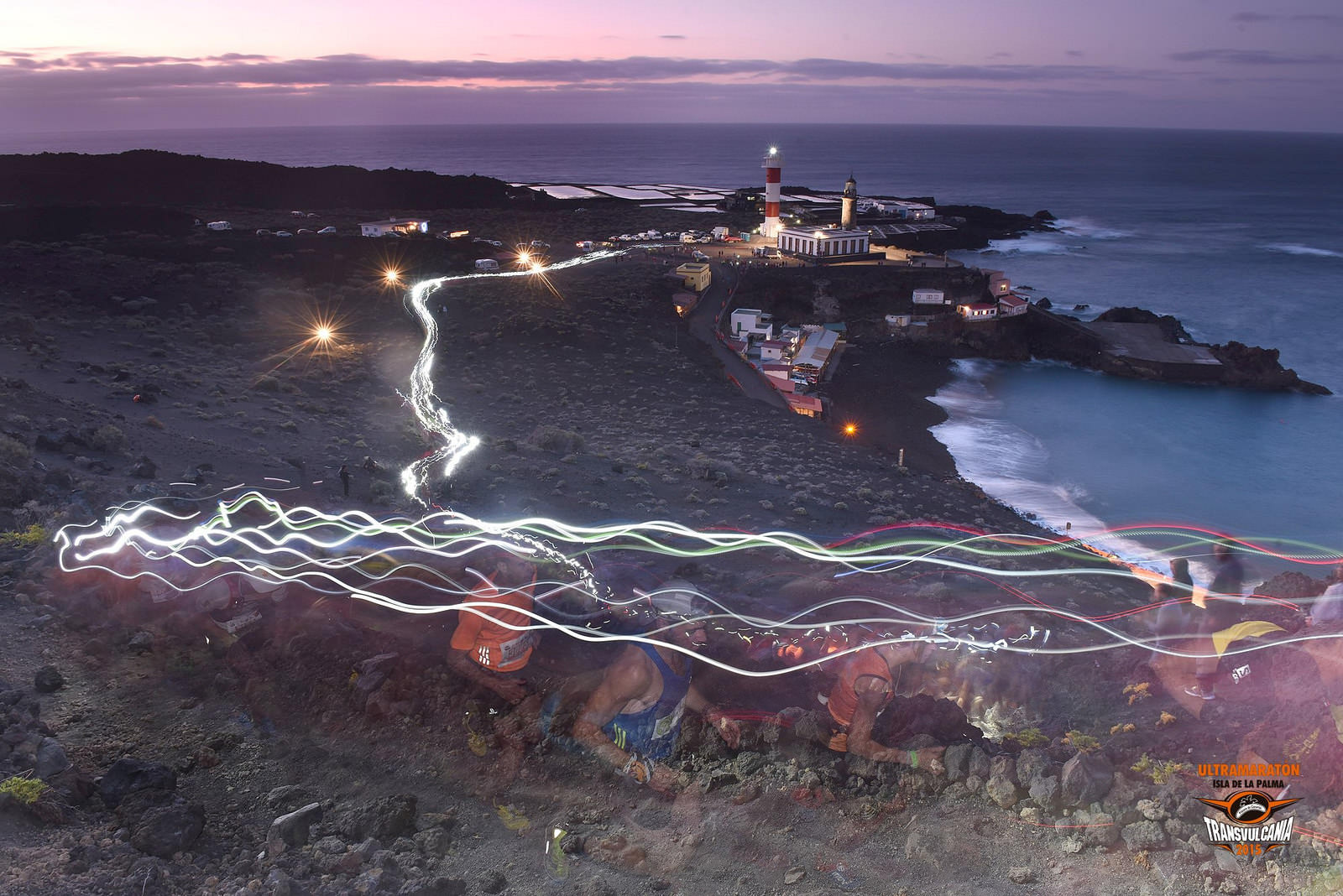 [stag_intro]Many people say that getting to the start line of an ultra marathon is almost as hard as running it – especially a race where there is a 40% failure rate. Although no stranger to endurance events, Jack Gammon, a music teacher and budding ultra runner from Warwick, recounts his experience before the 2015 Transvulcania Ultra Marathon.[/stag_intro]

I’m cold! Bloody hell! I didn’t expect to be so cold. More to the point, I wasn’t ready to be this cold. I’d heard the stories of heat, men’s tears drying before they’ve left their eyes, lava burning your shoes, hallucinogenic mountain lions leaping from the blackened rocks (as reported by Sage Canaday, who came 3rd 2014) but no one had mentioned the cold.

I struggle for someone to blame, but it is all my own fault. I even paid to be here! The exodus begins, like a trail of ants not really knowing who’s in charge, we clamber down the rocks, underdressed and shaking, making our way to the start of the race. Waves of beautiful stars explode above us and the wind bites at my face, reminding me of the bit in a post apocalyptic zombie movie when the goodies gently filter out of their hiding places to see what is left of their world. 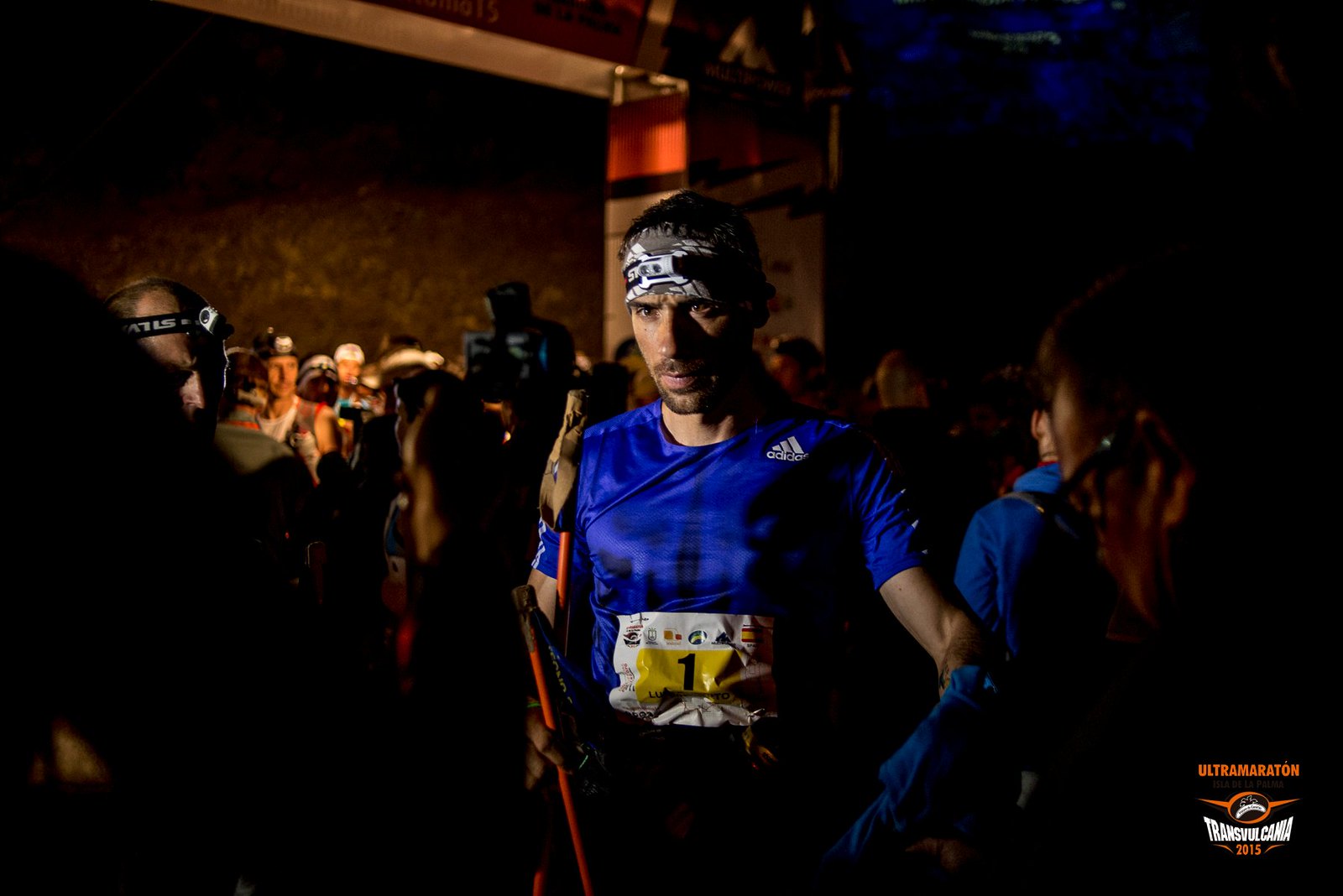 They really are beautiful stars.

So why am I here? I hear you cry. Well I have the Internet (which is a dangerous thing), I’ve paid my money like everyone else, I’ve trained hard and before you know it I’m ‘Ant number 645’ following the line obediently to the start of the 2015 Transvulcania Ultramarathon.

I potter about at the end of the headland under the dark shadows of the slightly soviet looking lighthouse and go through my tried and tested pre race routine of:

a) standing in the portaloo queue for a placebo Number 2 that I don’t need;
b) stabbing myself in the chest with race number safety pins;
c) cursing my own general stupidity.

‘Ya know, good positive stuff,’ but I guess I must be ready to go! The black sand whips up like a horror film necromancer. It’s all very quiet. 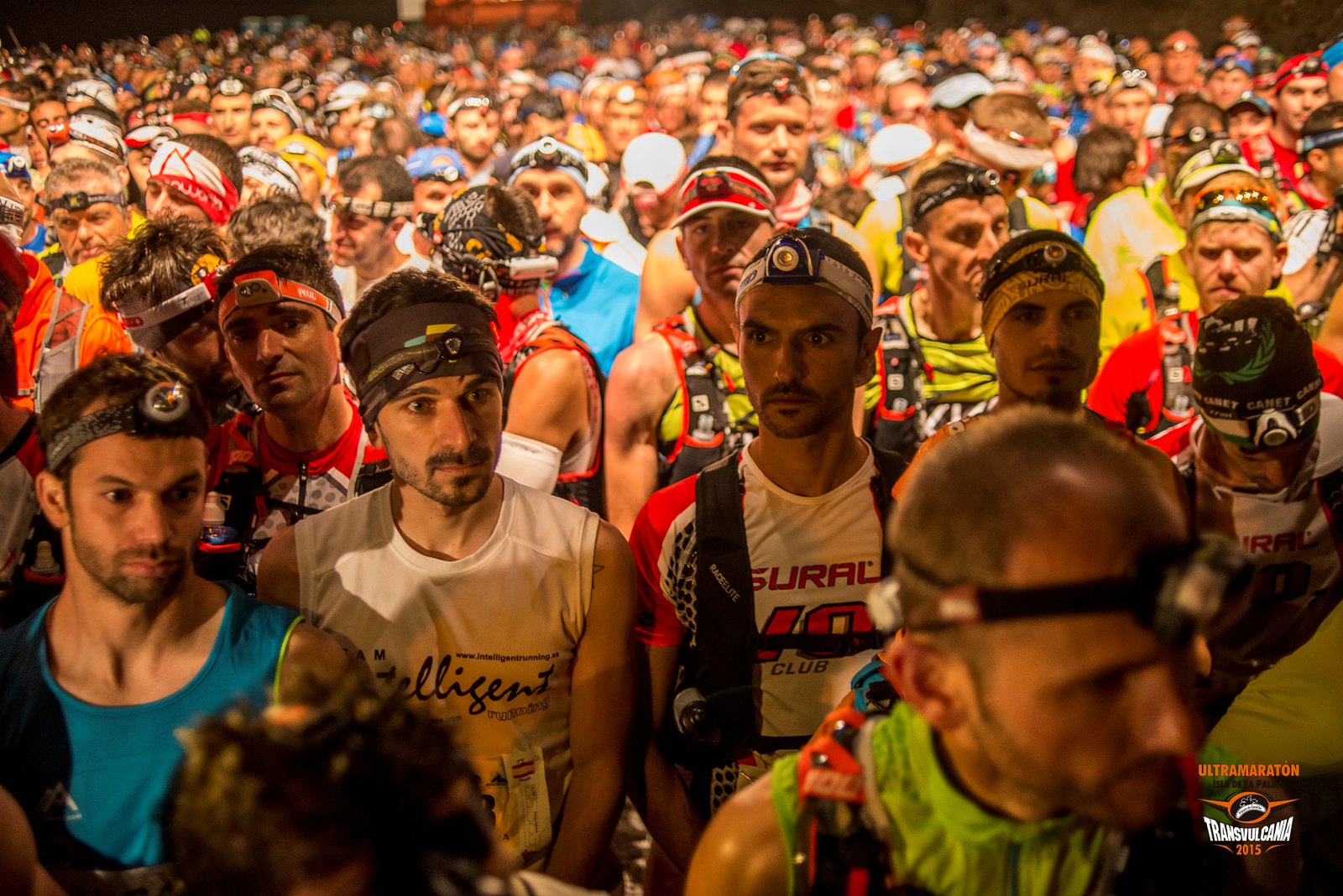 Having pinned on my race number, I’m now a yellow ant. All of us ants have a different colour attached to our carapaces, this denotes whether you’re a half marathon ant, a marathon ant or an ultra ant.  I scan around and notice there’s a lot of red and blue on show but not much yellow. Where are my fellow yellow ultra ants? I sit and huddle in a slightly homo erotic clinch with some half marathon ants to keep out of the biting wind and out of sight of the necromancer. I strike up a clunky conversation with a red ant in my best ‘Spanglaise’. I nod politely and try to absorb what sounds like very genuine and kind advice, then as I lean in closer to hear him through the clash of the storms, it dawns on me what my sage old ultra running comrade is trying to impart to me.

‘Get your Fuxking sh1t together now!! And get down to the end of the pier or you’ll miss the start you retard!!!’ Cue castanets and bolero handclap!!

I’m up, out and away from our love nest! ‘Gracias amigo’ is still ringing in his ears as I round the corner, an ocean of yellow carapaces attack my senses: a raging battalion of fitness in every shape and size you can imagine. A guy stands in the front row (a very very dangerous place to be unless you’re hyper sure of what you’re doing) in nothing but a pair of cut off denim shorts,raybans and a foot long beard. You’ve got to be good to pull off that look. Surely? 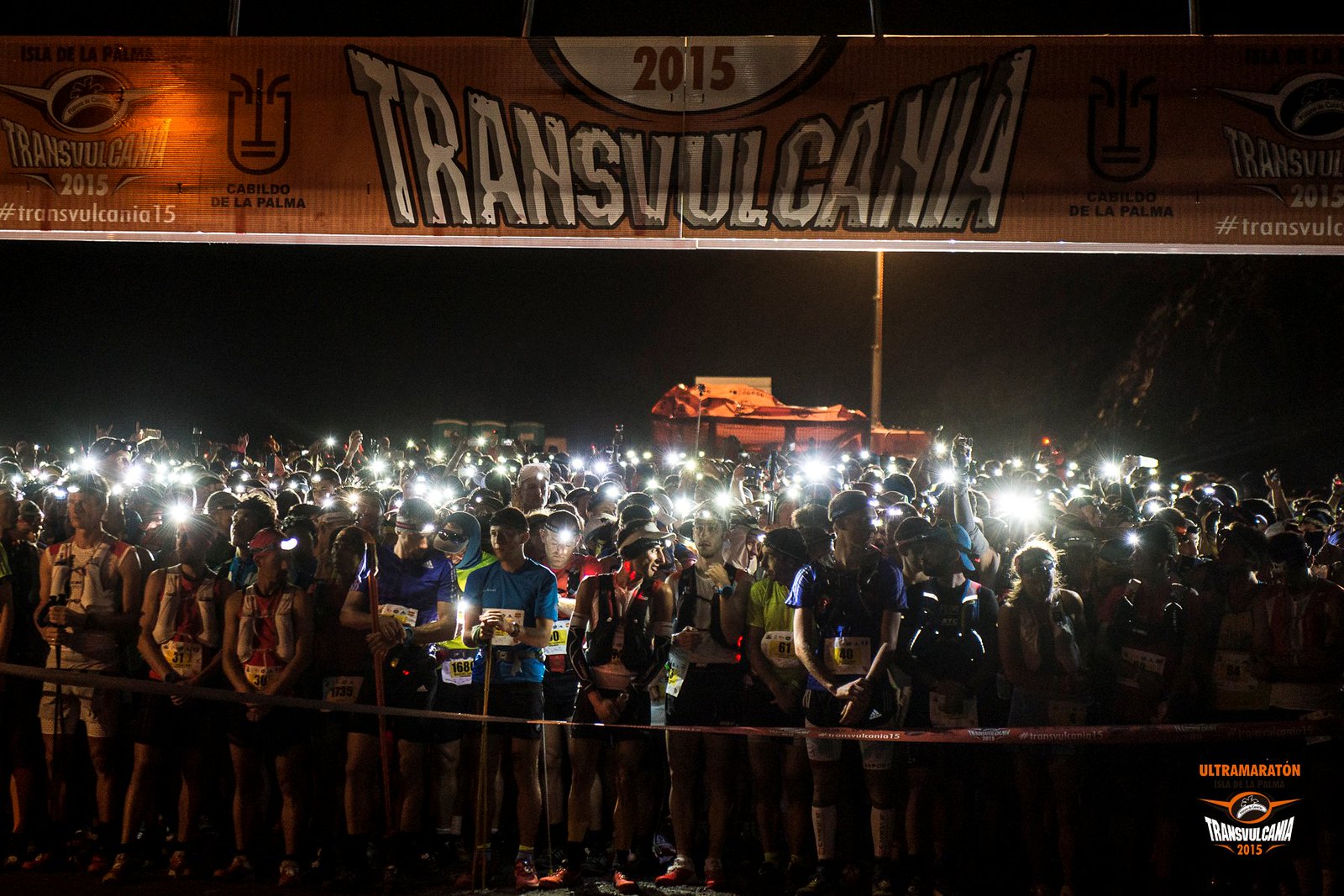 The waves crash around us as a big yellow digital countdown projected on the cliffs ticks over to 2mins to the start, AC/DC Highway to Hell, bellows at me. It sure has a satanic feel to it down there as I’m absorbed into the fiery yellow throng. I’m 6’2″ and it doesn’t take me long to locate a couple of lads from London that I’d chatted to earlier. I try and make my way towards them only to be held back by yellow soldier ants defending their positions.

1 minute 30seconds to go on the big yellow clock. I turn my phone into video mode to try and capture something for my intrepid support crew babysitting back at the hotel. it doesn’t do it justice. 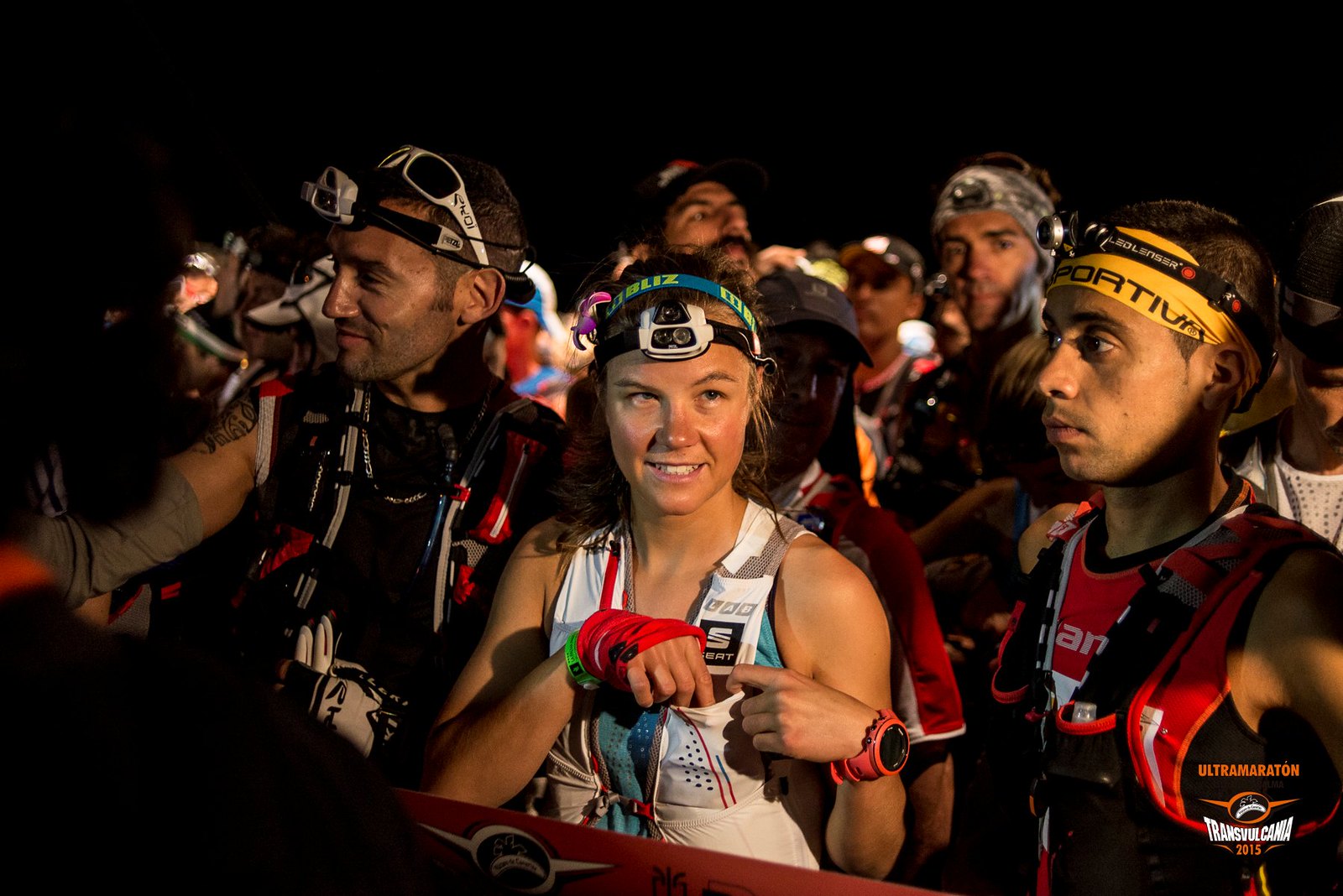 ’59’ seconds says the clock. I fix my laces, check my rucksack. ‘Should I have tried harder for that poo?’

’49’ seconds… Forest Gump and his mates on the front row are like a pack of rabid dogs!!

‘10,9,8,7,6’ the whole sea of yellow is now chanting, 2000 head torches sparkling as if to give the beautiful stars something beautiful to look back at.

‘5,4,3,2,1… bang!’ Forest and his mates hit the jetty we all walked down in an utterly terrifying stampede, I can make out the diminutive figure of Emilie Forsberg the eventual girls winner shoulder to shoulder fearlessly fending off one of the most aggressive starts I’ve ever seen anywhere.

My little battalion of ants move out and I’m running. my Transvulcania ultramarathon 2015 is under way. 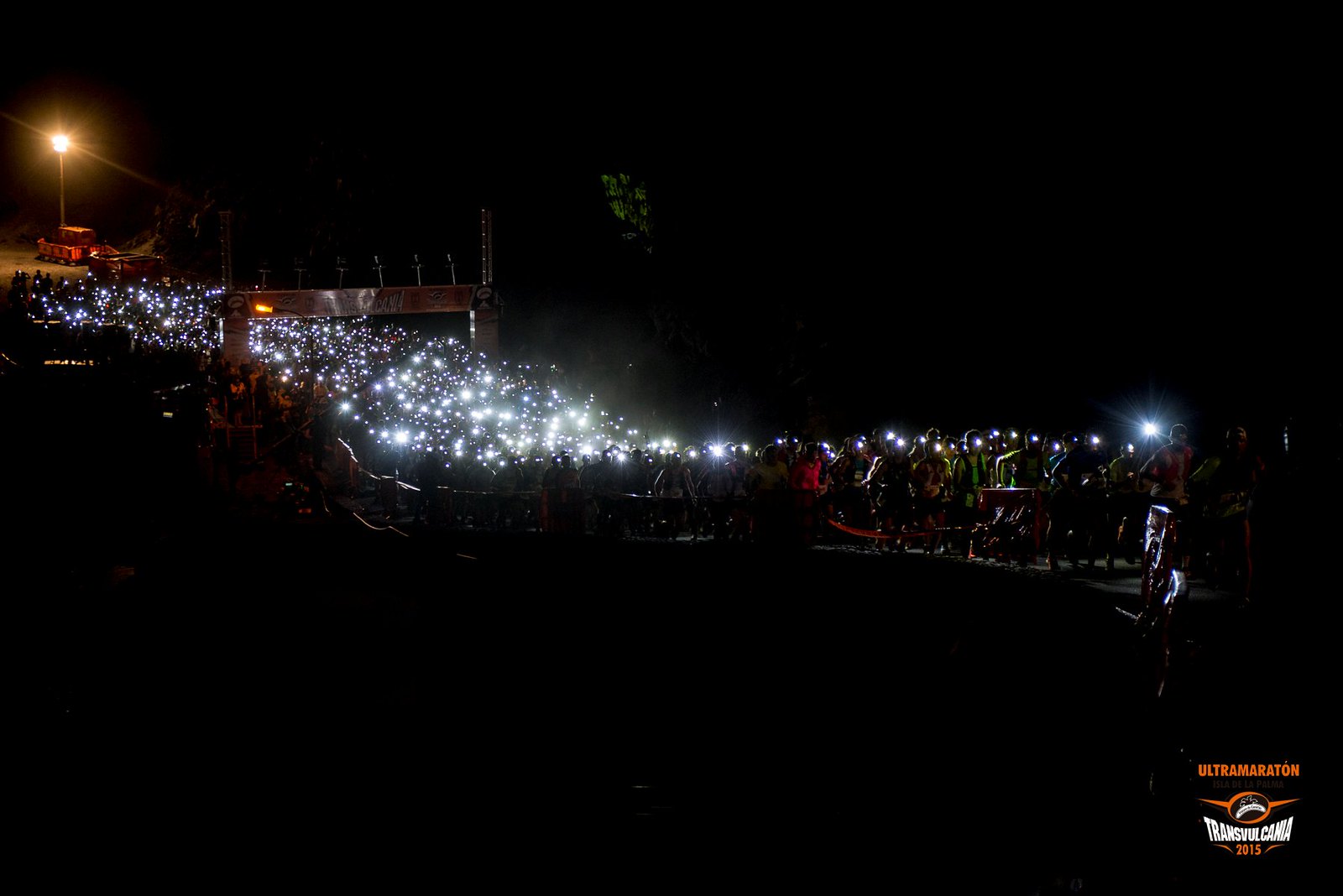 What is it like out on the course? What is the race actually like? Well the fact of the matter is, Internet land is full of brilliant race reports, like the forthcoming one from Tobias. And that’s not me being self effacing nor lazy. It’s a staggeringly beautiful race course and I know I wouldn’t do it justice. And once you’ve done the race yourself, you’ll understand where I’m coming from.  Meanwhile, Ian Corless’s excellent writings are a great place to start.

Did I finish? Well, I’ll leave that question unanswered too. Who knows whether it is within you to finish such a savage race that sees only 60% succeed. It could well be. I just wanted to share a few of my feelings about the start line, and hopefully ease your mind that if a lanky music teacher from Warwick can rub shoulders down there with the mistral necromancer in that army of madness, so can you. It ain’t all bad. What happens at the finish line? Well I guess that’s down to you…

Next year’s Transvulcania Ultramarathon takes place on 07 May 2016. You can enter via their website. 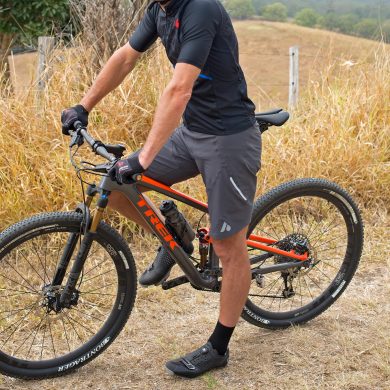