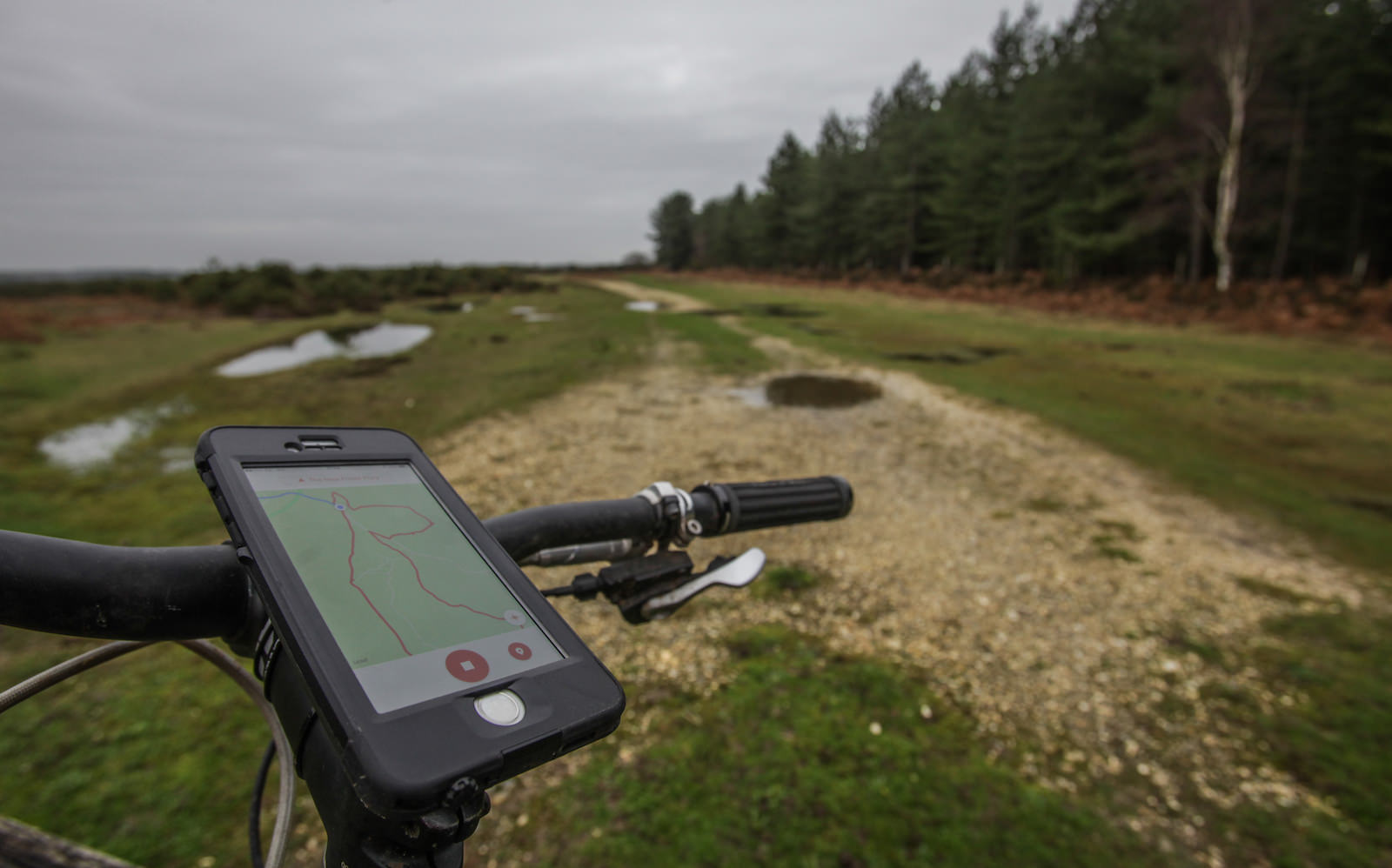 A Strava Art ‘Riding the Pony’ Challenge in the New Forest

[stag_intro]It’s day 14 of Tobias and Dave’s Great British MINI Adventure around all 15 of the UK’s National Parks. And as it’s getting close to Christmas and the end of their adventure, they decided to take things easy and embrace the artist in themselves. So what better way to explore the New Forest National Park but by bike whilst doing a spot of #StravaArt.[/stag_intro]

For our visit to the New Forest National Park, our 14th and penultimate micro adventure, we decided to have a bit of fun.  We’ve been pushing ourselves to the limits of what’s possible within the time we have in each National Park, doing some fairly awesome adventures. But sometimes, it’s nice just to soak in the scenery. So what better way than to go for a road cycle or mountain bike ride – two things that lend themselves perfectly to this ancient forest.

However, if you’ve ever taken a look at the New Forest Cycle Map, which offers over 100 miles of approved cycle routes, besides being impressed there’s a chance you might find it somewhat overwhelming. Well, at least that’s what we felt as we sat in the bar of the High County Inn last night, planning what we’d do and where we’d go. 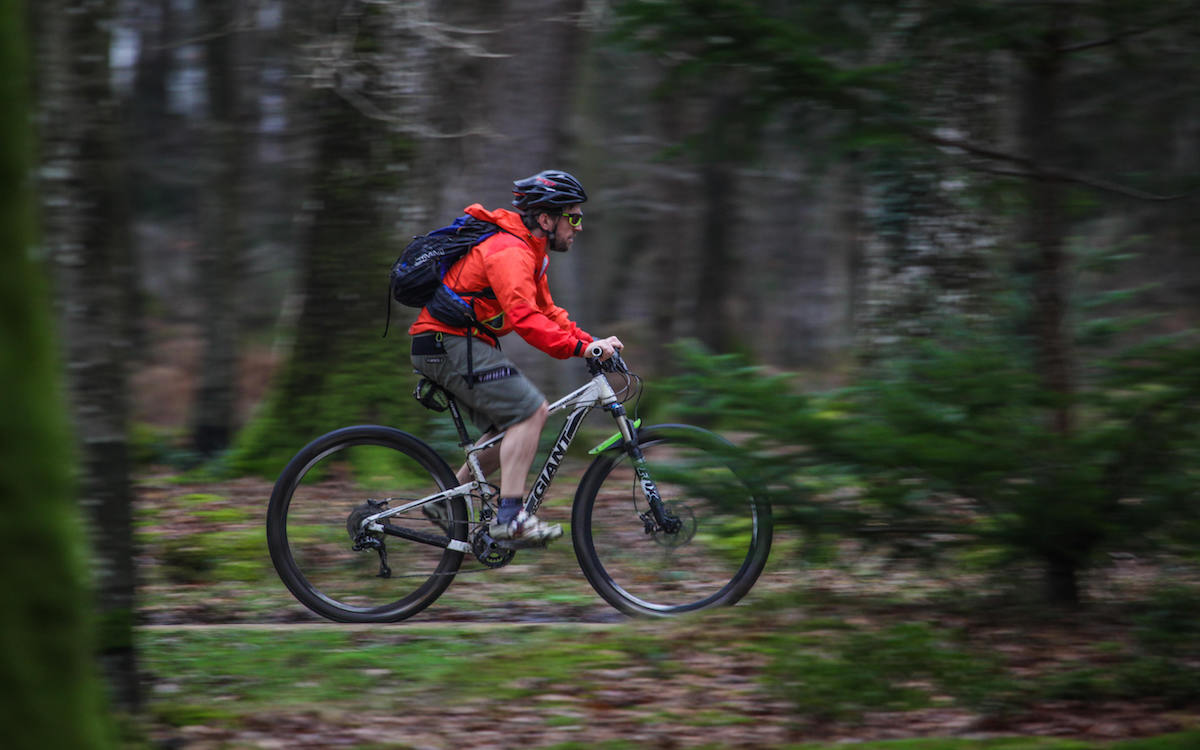 ‘Have you ever done any Strava Art?’ I asked Dave. For the uninitiated, Strava Art is what some might call a niche sport – drawing GPS routes that take the shape of something – perhaps an animal, an object (such as a bicycle) or, as is often the case, a phallic symbol. ‘No,’ was his answer.

Thus began some time spent on Google, looking at some of the amazing GPS art around the world.  However, the one we were most inspired by was of a New Forest Pony. Sadly, we didn’t have time to ride 231kms in the space of a morning – not unless we had the legs and lungs of Chris Froome. So we thought it might be fun to instead do a ‘MINI New Forest Pony‘ – which at a 16kms is far more achievable in a couple of hours, including faffage.

I love maps. In fact, I’m a firm believe that maps are the key to a decent adventure, which is why they’ve proved a crucial part in our planning process for the Great British MINI Adventure. 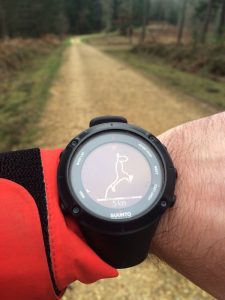 For the past couple of weeks, we’ve been using a range of mapping tools, in particular the newly available online Ordnance Survey mapping, which allows you to plot and then print out the route you need as opposed to carrying a massive 1:25,000 paper map.  From a GPS point of view, when on the ground I’ve either used my Suunto Ambit 3, ViewRanger or the OS app. But today, for the purposes of planning a route, we used the Strava Routes tool – which is very easy to use and to share with anyone else using Strava.

I’ve had to wrack my brains a bit, but I don’t think I’ve actually properly visited the New Forest. And neither has Dave. Which from my point of view, is kind of weird, when you consider how close it is to my home in London and how often I’ve been down to 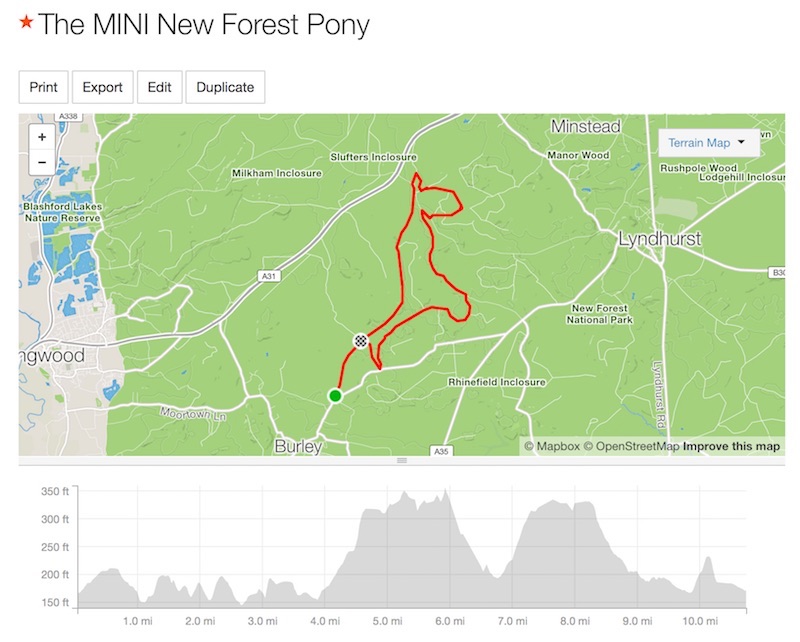 Southhampton, Portsmouth, etc. But I think it’s because I’m always passing through on my way to somewhere, as opposed to stopping and actually exploring the New Forest in the proper sense of the word.

There are several things of note about the New Forest. It’s an ancient woodland dating back to William the Conquerer. And it has a lot of New Forest ponies.  We learned the history of this last night, from Steve, a practicing commoner and patron of the High Corner Inn, who owns 50 ponies.  Some of which we met grazing outside of the pub this morning.

I never knew the New Forest was so beautiful

It sounds ridiculous, but I’ve been totally taken aback by the New Forest. OK, it might not have much in the way of hills (although it does have undulations that might cause you to change gear on your bike a few times) but what I loved about it was the fact that despite being in a relatively populated areas, there were no fences or telegraph poles (at least not that we could see). It felt like we were stepping back in time, in more ways than one.

Ponies roam free. People walk their dogs and actually acknowledged you as you ride past. Cyclists nodded their heads a little more enthusiastically than around London. There are less cars. People don’t drive as fast. It was lovely.

As was following our Mini New Forest Pony route. It might not have been far, but we had great fun trying to map out our route. There were a few instances when we weren’t certain if we were meant to be riding down a particular route (despite it looking OK on the OS maps), which resulted in us walking with our bikes, we had great fun. It was hugely satisfying seeing our pony take shape – even though it looked a bit odd. As Dave said to me at one point, ‘This is one f*£cked up pony’.

Having decided to spend a second night at the High Corner Inn (we liked it that much), we ended up seeing Steve again who asked us how we got on. After explaining what we’d done he said to us ‘Crikey, you’ve not even been to the best bits. Didn’t you listen to anything I said to you last night’. It was difficult to know how to respond to that, except by saying, ‘Well, if we liked the ‘sh*t bits’ then imagine how impressed we’d be when we get to the good stuff’. 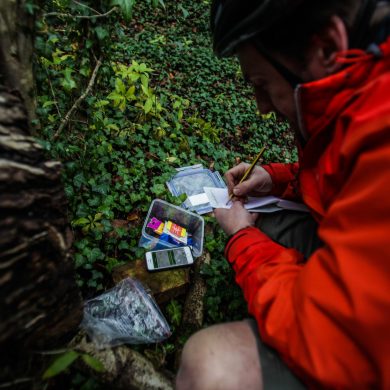 A GeoTour of the South Downs