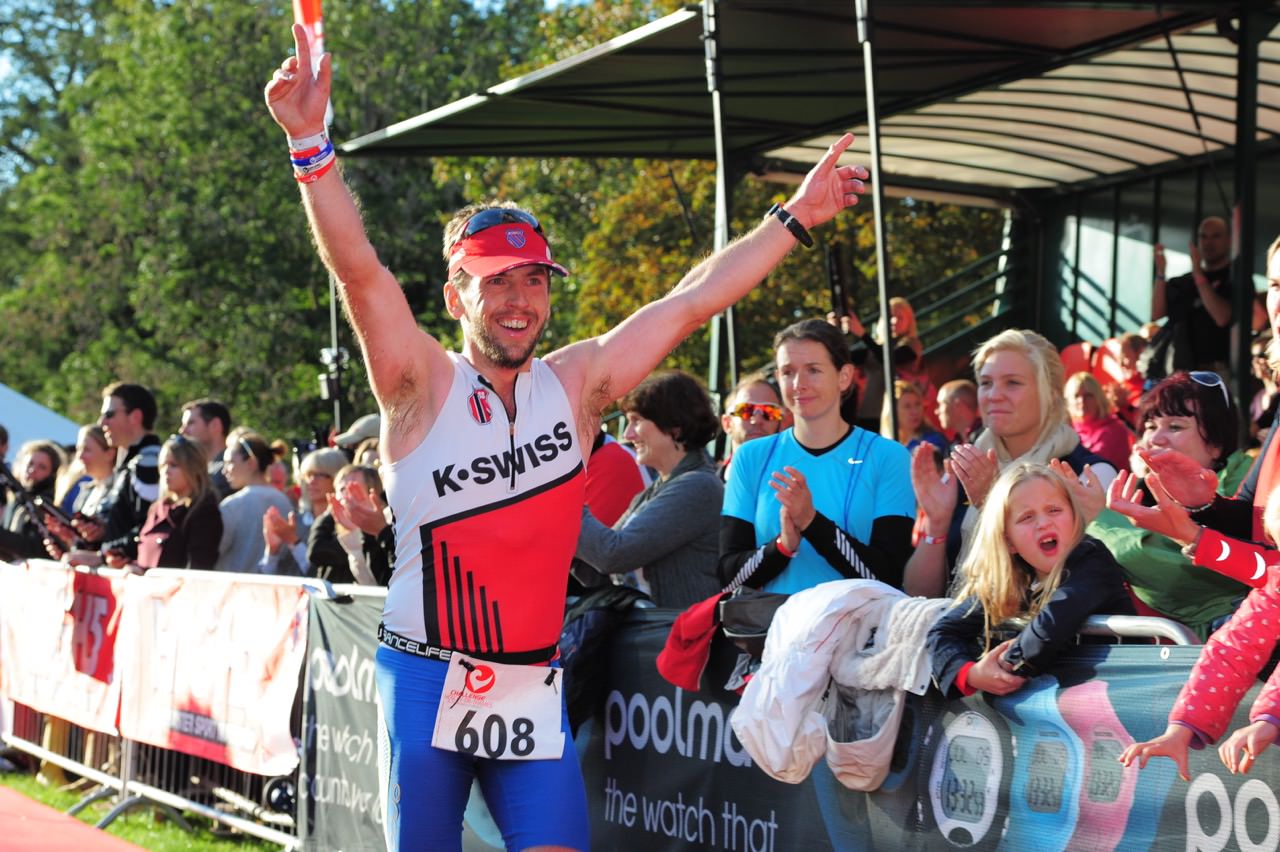 No one said that ironman races were easy and completing three in one summer is, for most people, a faintly ridiculous idea.  In June I flew to Salou, a seaside resort on the beautiful Mediterranean  coast of  Spain, to compete in the inaugural (and rather hot and hilly) Extrememan 226.  In August, I found myself in Norway, taking on the iconic Norseman Xtreme Triathlon – the toughest iron distance race in the world.

And now I’m taking on the first ever Challenge Henley.  The prospect of doing an iron distance race on my doorstep filled me with a different type of excitement to the one I’ve had in traveling to slightly more exotic places: it wasn’t going to hurt quite as much as the Norseman and Extrememan, I had never done a Challenge race, and it certainly wouldn’t take anywhere near as long to travel there and back.  Well, this at least, was my theory.

Challenge Henley is the latest edition to the now thirteen-race strong Challenge Family.   Besides the famous connotations with rowing regattas and business schools, Henley is also at the foot of the ancient Chiltern Hills, making it an attractive and perhaps obvious location to host an iron distance triathlon.  Moreover, because the Challenge series races are well known for being relatively fast, without sounding strange, I was therefore looking at Henley as a something of a ‘recovery ironman’.  Indeed, after the Norseman, I was in desperate need of an ‘easy’ race!

However, I’m not sure that the 600 other athletes from 25 countries were thinking quite the same as me.  People had travelled from as far afield as America, New Zealand and South Africa to be the first to race this inaugural Challenge event in the UK. 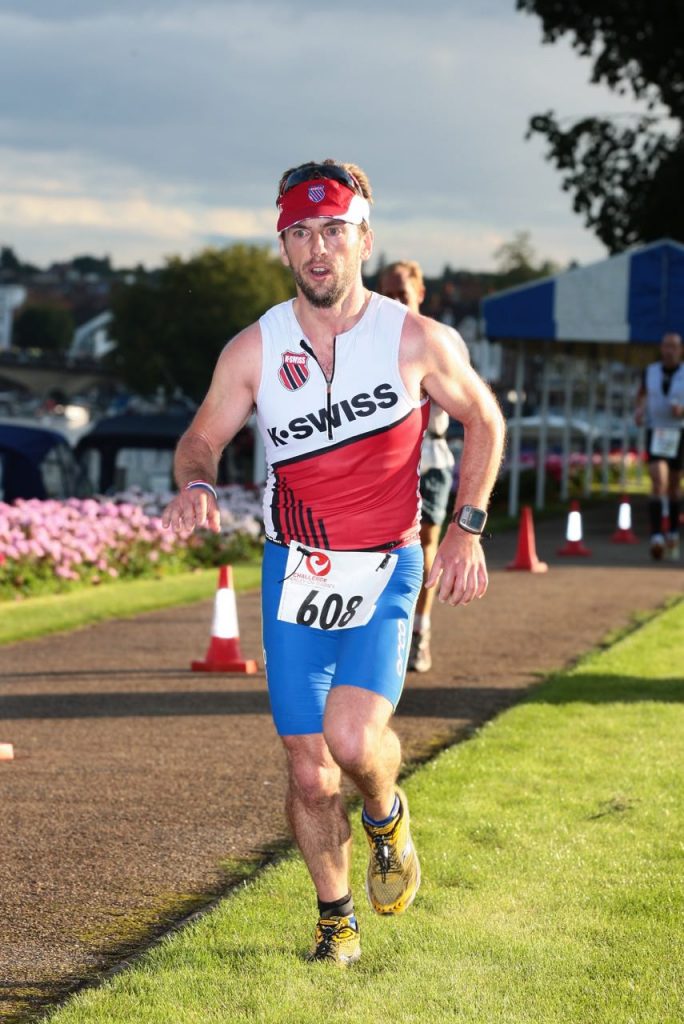 One of the annoying things about iron distance triathlons is the logistical planning that you have to go through in preparing for the race.   And although by no means as complex as planning for an unsupported race such as the Norseman, there were still a few complexities in planning for Henley.

For instance, the swim start is not where the finish is – which means that you have to think about where you want your car to be when you receive your finishers medal to the collapse into the hands of a massuse.  And the transitions were in different places too.  But this is all part and parcel of triathlon – and without it, we’d have too much time to think about other pressing things.

Registration was a much more speedy and efficient affair than my attempt at driving out of London on a Saturday.  Within minutes of arriving I had picked up my obligatory race swag and the all important chip and stickers.  As I gradually bumped into various friends from my racing past on my way to the bike racking, I began to get excited.  This might be a fun race.

The swim start is at Henley Business School and about a five minute drive up the road from the registration at Phillis Court.  It’s a bit longer if you do what I foolishly did, which was to cycle precariously along the busy A-road in my flip flops, with various transition bags dangling from me.  Not something I would advise anyone else to do.

So, having racked my bike, taken note of the massive tree next to it, finally made the executive decision of what to leave in my transition bags and by some fluke caught a lift back to my car, it was time to get back to London.  Although there were plenty of places I could stay in and around Henley, I rather fancied the idea of eventually sleeping in my own bed before an ironman.  Plus I had promised to turn up for a few hours of a friend’s stag do in London (I don’t like making life easy for myself).  And after all, how long can it take to drive to Henley at four o’clock in the morning?

Come race day, you have two choices for parking.  You can leave your car at the finish and then get a river taxi to the swim start at Henley Business School.  Or, if you haven’t realised that you had to book this in advance (like little old moi), you will have to park at the school itself and worry about picking your car up after you’ve somehow managed to swim, cycle and run 226kms.

The swim start was organised in waves of ten minute intervals, based on your predicted race time.    As I had only registered 2 weeks earlier, I was in the third wave at 0650.  This gave me time to hear the various moans and groans of delight from the earlier waves as they submerged in the 15 degree C water, which was balmy in comparison to the 5 degrees outside.  But all of this added to the already buzzy atmosphere as the sun rose to reveal a rather enchanting mist hovering over the Thames.

Despite the chill and the fact that I would be initially swimming against the current, I was relishing the fact that for once, I couldn’t go too far wrong on the 3.8km out and and back swim along the River Thames.  My zig-zagging would be contained by some useful river banks!

I emerged from the swim sporting various bits of river bed vegetation on my face, feeling like the ghoulish character Davy Jones of Pirates of the Caribbean fame.  Having discovered that I had somehow done another personal worst in my swim time coming practically last out of the water – I jumped on my bike and thought ‘to hell with it – I might as well crank it up a gear’.

The Chilterns are beautiful and well worth a visit.  But cycling three out-and-back loops over the space of 180kms meant that we got to see the same route six times – which is a little more often than I would care for, especially when one one of the hills is appropriately called Pishill.  But I reminded myself that this was perfect for the loyal spectators.  Plus, you got to see the pros at the front of the field as they careered past you, generating that terrifying noise unique to rear disc carbon wheels. 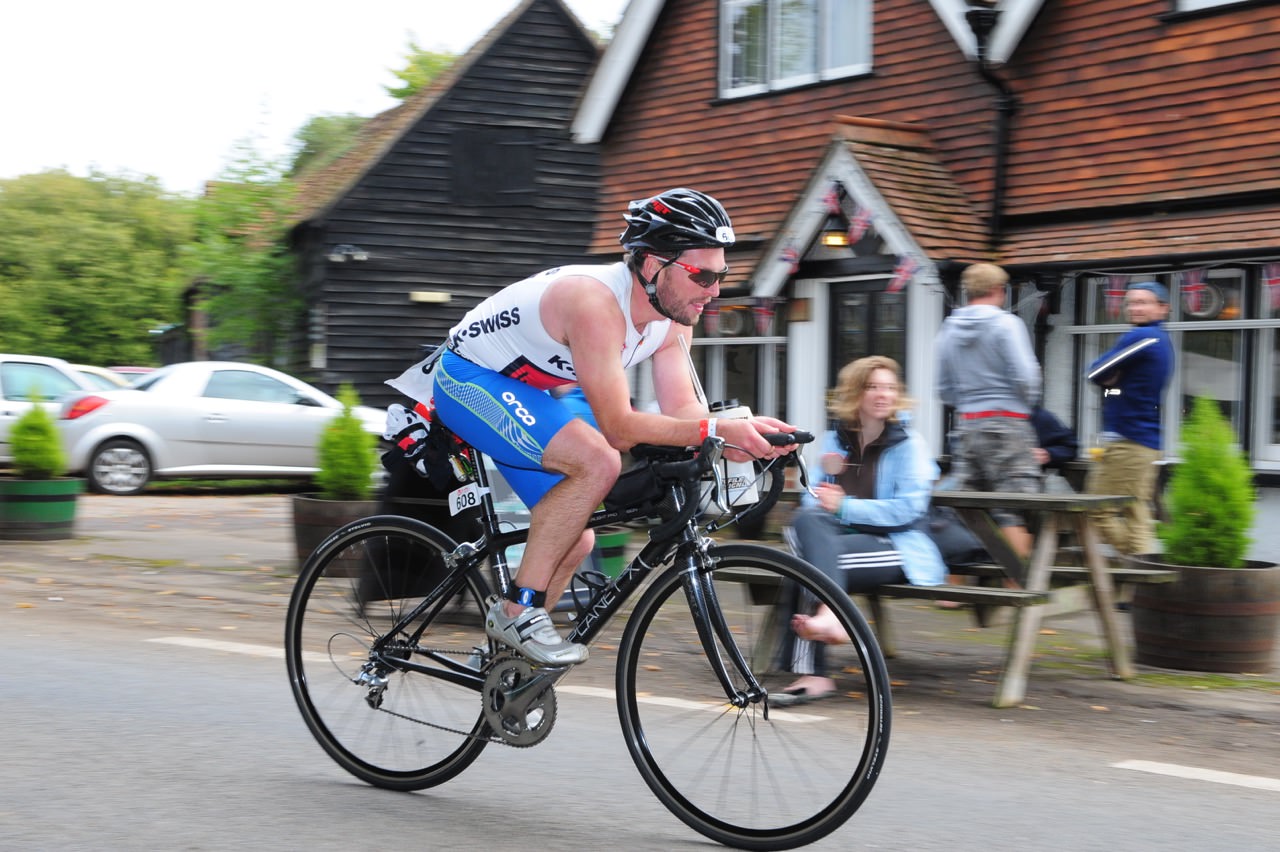 Having done the Norseman only 6 weeks previous,  I wasn’t in the slightest bit fazed by 2,000m of climbing.  In fact, there are essentially two hills in each lap – both of which are long and gradual in climbing but you’re rewarded with speeds of up to 40mph on the return leg – when the rather bumpy roads allowed.

Despite the rather repetitive nature of the course, I actually had a good time on the bike.  This was possibly due to the fact that the majority of the competitors were equipped with aero helmets and TT bikes.  I was not.  So I took immediate pleasure in overtaking anyone that looked like they should be faster than me, especially if they had a rear disc wheel.  And therefore it was with absolute delight (and surprise) that my cunning overtaking maneuvers had secured me the 62nd fast bike split of the day with a time of 5.42 – a new PB.

After my disastrously slow and painful run at the Norseman, I didn’t quite know how the four-lap marathon would pan out, especially as I had done no long runs since then.  But on thrusting my bike into the hands of a cheerful race volunteer at T2, I trundled off, content that whatever happened, I had at least enjoyed the bike leg.

The picturesque town of Henley is rather splendid and lent itself brilliantly to both spectators and to the runners.  Although, only a small section of the run is actually in the town and therefore on tarmac, the rest of the course involved running through fields, or along the river’s edge.  When, typically, it started to rain, I began to think I should have brought my trail trainers, as the soft ground underfoot was fairly wet and not ideal of racing flats.

The support on the run was probably the best part of the whole race.  The bridge into Henley was lined with friends and families, thrilled to cheer on their weary athlete.    In fact, this was the first ironman I had done where my friends could actually come to support me.  A large bunch from my club, the Clapham Chasers, had cycled out to Henley to cheer a few of us on, which gave me the extra impetus to finish hard before I unceremoniously cramped up.

And hard I did finish.  The final lap flashed by as my mind turned to how much I had enjoyed the race, erasing any pain I might be feeling in my legs.  As I trundled to the finish area some 3hrs 21 minutes later, I couldn’t help but grin.  By some twist of fate and stroke of luck, I had knocked almost an hour off my ironman PB, to finish in 10hrs 38 (and ultimately 7th in my age group).  As I drove home, several hours and free massage later, I decided I wanted to do another Challenge event.  They aren’t necessarily easy, but they certainly are fun!  But first,  must get myself a TT bike and one of those funny looking helmets! 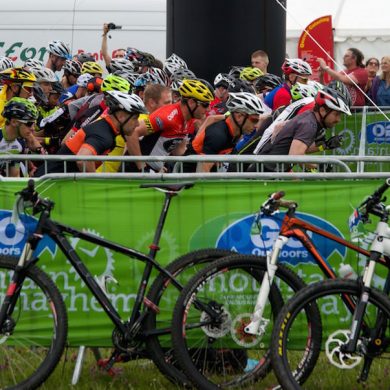