Was entering the Dragon’s Back Race a genius idea? Or total madness?

[stag_intro]Every ultra runner has a moment of madness, normally the point at which they enter some ridiculous sounding race that promises misery, blisters, injury and at worse, possible death. Despite having done numerous ultras across deserts, jungles and mountain ranges, my biggest folly was entering the 3rd edition of the Dragon’s Back Race. Here are a few thoughts running through my mind one month before the race starts on 22 June, 2015. [/stag_intro]

What have I let myself in for?

A couple of weeks ago, I was midway through the Transvulcania ultra, another ridiculous race, but somewhere a lot sunnier than Wales – La Palma. My body was feeling pretty battered, the sun was beating down on my head, I had very little water left and I began to think about the Dragon’s Back Race. They weren’t good thoughts! ‘What was I thinking?’, I said to myself. Why do I do these silly races? Why don’t I just do park runs or sprint triathlons. Why do I have to choose a race that will put me so far out of my comfort zone, I’ll barely know my own name! Hell, Day 3 of the race is on my birthday – much to my wife’s irritation. At that very moment, I was on the verge of pulling out of the Dragon’s Back.

By the time I finished Transvulcania, some 13hrs 55 mins after I’d started that morning, I decided that I’d still do the Dragon’s Back. Because if I pulled out of the race, I’d only regret it. It would gnaw away at me as unfinished business.

On telling people I’m doing the Dragon’s Back Race, the first question I normally get asked is ‘Can you navigate?’  It’s a good question and one that I normally answer with a positive ‘Yes’. But I sometimes wonder if I’m kidding myself.

Before meeting my wife, who has no faith in my ability to read a map, I’d always thought of myself as an OK navigator. Five and a half years regular service in the army, numerous orienteering races, adventure races and even doing the Mountain Leader Training (Summer) course – I’d learnt how to use a map and compass. 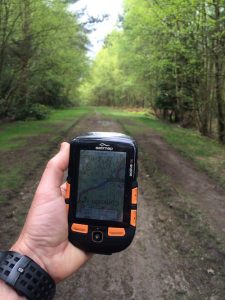 But after doing a Bob Graham Round attempt/recce last summer, I remembered what a true skill the art of navigation is – especially when it’s bad weather and there’s poor visibility. Which is why I contacted SatMap and asked if I could borrow one of their Active 12 GPS devices for a few months, along with their 1:25000 maps of Wales.

self-sufficiency, an un-marked course require navigation, tough terrain, series amounts of climbing and descending – these are the elements that make the Dragon’s Back special. And until 2015, GPS units weren’t allowed. But after two-thirds of the field failed to complete Day 1 of the 2012 race, Shane Ohly, the race director, decided to allow competitors to use GPS to those whose navigational skills are not quite as good as their running:

“Competitors should ideally be capable of navigating in poor weather conditions using a map and compass. However, competitors may also carry a GPS to help their navigation. Competitors can load checkpoint grid references (or any other location) into their GPS but no route information will be supplied.”

And although I’ll be aiming to use my map and compass as my primary means of navigation, it’s reassuring to have the backup of the Active12!

Am I fit enough to run the Dragon’s Back?

On most days of the week I can run a sub 3-hr marathon. I can run ultras on next to no training. I even cycled the length of Britain in 9 days,  despite having only been on my bike a handful of occasions that year.

But this is different. Ideally, I’d have been chasing chickens around the top of Mount Snowdon, conditioning my body to the battering it’s going to take.  Sadly, living in London isn’t the ideal training ground for running across mountains – with 17,000m of ascent.

Although I’ve managed to do at least 1000m of ascent a week, thanks to various races such as Ecotrail de Paris 80k, Madeira Island Ultra Trail 115k and Transvulcania 73k, and a lot of running around Box Hill in the Surrey Hills.

I’ve also had some excellent coaching from Andy Bruce, who wrote a helpful piece on Hard as Trails on how to train for the Dragon’s Back. So in theory, I should be ready!

Have I got all the kit I need?

And that’s just the stuff you must take with you, rather than the additional recommend kit, such as GPS, phone and altimeter.

Trying to work out what shoes are best for running through the mountains for 5 days on the trot, what backpack to take and how big, what my hydration system would be, what food to take, whether to use poles or not – these are all things I’ve been having to think about (as will every other DBR entrant).

I’ve solicited the support of Inov8 who’ve kindly supplied me with the best kit for the job. For a pack, I’ll be using their Race Ultra 5 pack (or the Race Elite 16) if I need to carry a little extra kit. They’re both super comfortable and use the soft flasks that I’ve come to be a fan of.

Mountain running shoe wise, I’m probably going to be using a combination of the Inov8 Roclite 295s (which I used in Transvulcania) and the X-Talon 212s. I’ll swap according to the terrain. However, I’m hoping to get my hands on the new Terraclaw 250s, which might be the perfect compromise.

In the past, I used to be a lot more competitive. Not finishing in the top 1% of the field wasn’t an option. But nowadays, as I get older and winning becomes less important, I’ve not been in such a rush to get to the podium – nice thought it is. I’ve actually quite enjoyed being able to stop and take a photo, or sort out my feet without worrying about time or losing positions.

And I don’t think this race will be any exception. There are some strong athletes taking part this year, such as Jez Bragg and the previous winner, Steve Birkinshaw, many possessing a combination of strong navigation, experience on the hills and high levels of fitness  – meaning they’ll be in a different league.

But hey, I’ve long-held the opinion that the less time on your feet the better. So providing I don’t get lost – I’ll not be mincing about the place smelling the flowers. Although I’ll definitely be taking a few photos!

All said and done, I’m under no illusions how tough this race will be. I feel as though I’ve been training for the past 10 years for it. The 200 odd races I’ve done have been a build up to this moment. And then I also remember, that it’s sometimes good to be afraid – it’ll stop me getting complacent!