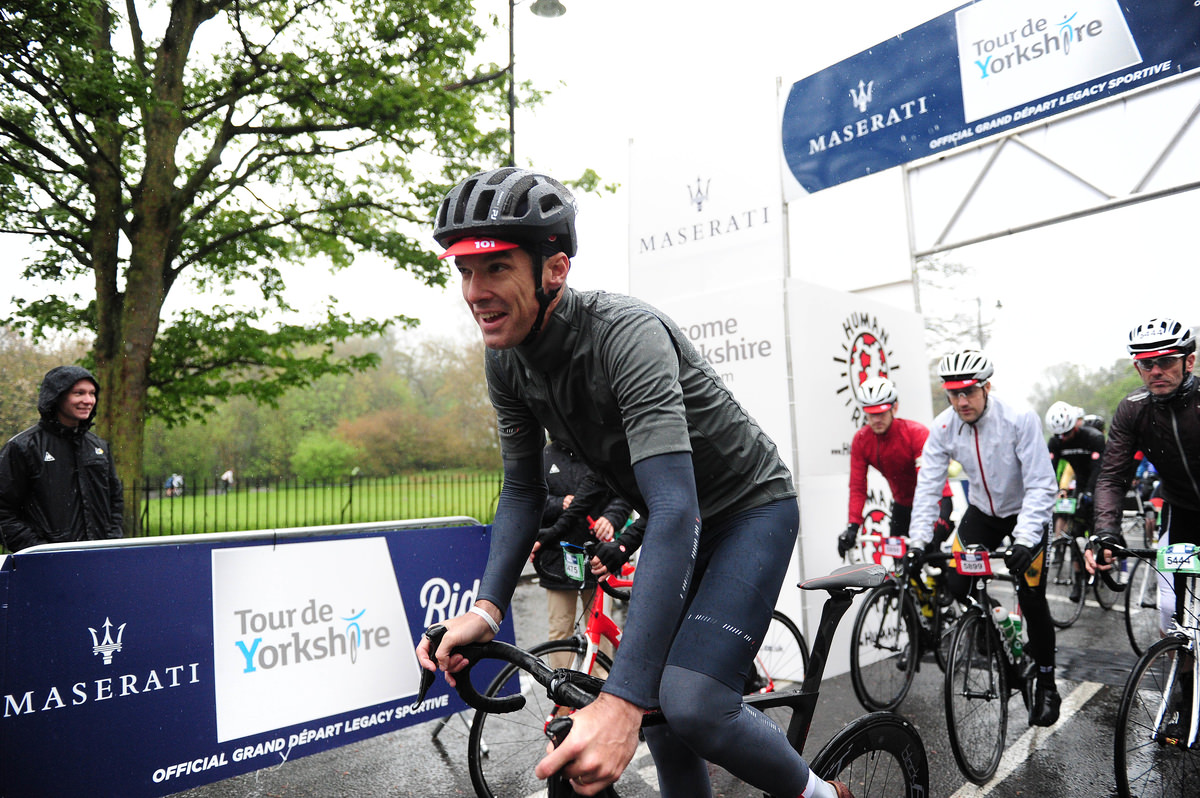 [stag_intro]Getting up at 4am on a bank holiday Sunday is probably most people’s idea of hell.  However when my alarm clock went off alerting me it was still dark, I had an excited yet nervous energy in tackling a not-your average kind of sportive cycle ride. My friend Charly (Roberge) and I were about to take on the Maserati Tour de Yorkshire Ride – 140km ride with a cheeky 2,600 metres of climbing.[/stag_intro]

‘Normal’ people at this time in the morning were outside of the hotel in Leeds city centre, wanting to pile into bars to watch the boxing!  It was quite a surreal experience putting the bikes on the car roof rack and rolling into the Maserati hospitality tent which had every kind of breakfast going.  It was grey and gloomy outside and the atmosphere was rather quiet as everyone faffed with bike bits, pinning their number on their jerseys and wondering whether they had enough energy bars on them to keep their legs peddling over the long distance. 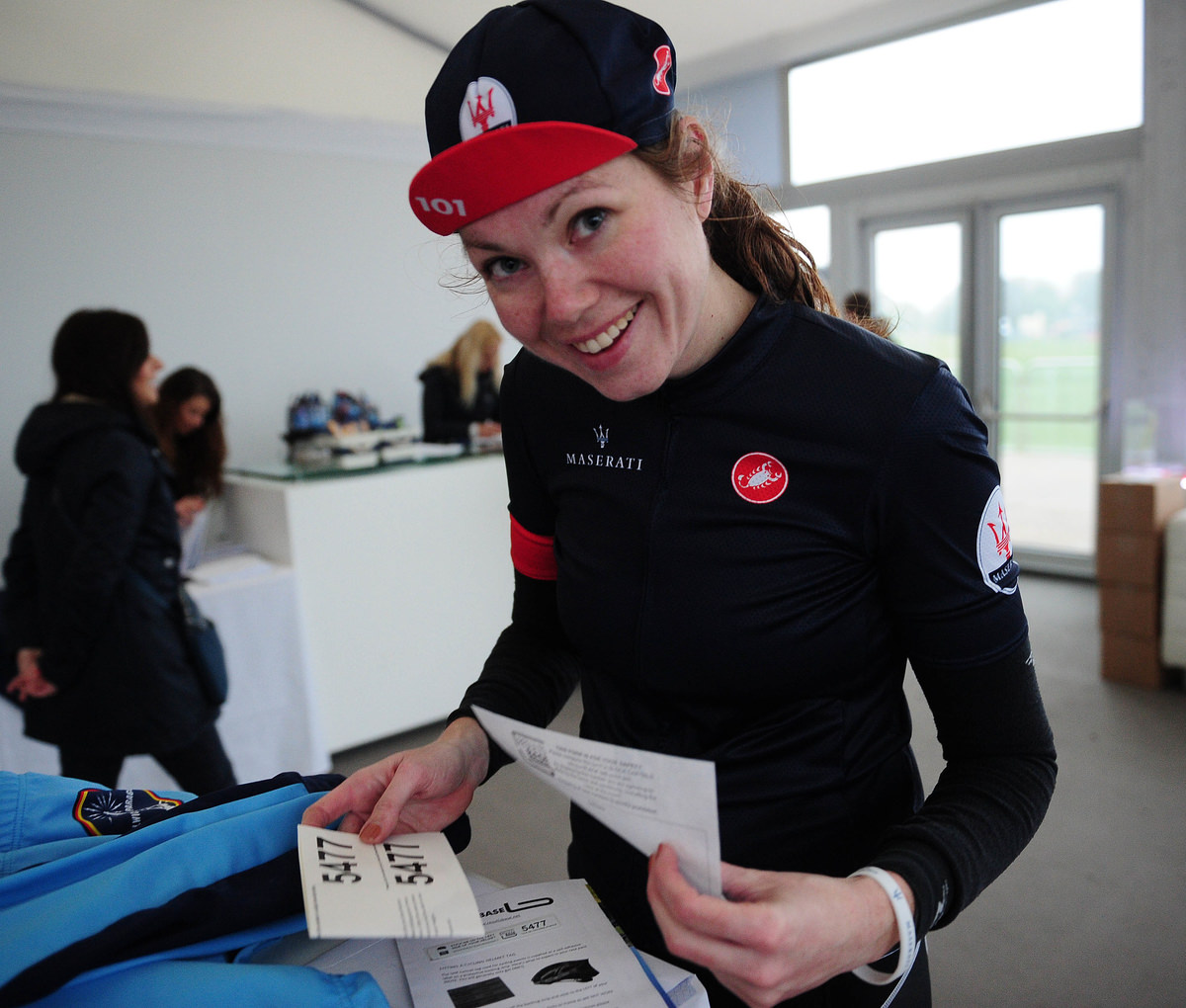 There was a slight apprehension, which I think that was due to the weather forecast the night before, as there were two droplets of rain on the BBC website, which usually means heavy downpours (not ideal conditions for a 7 plus hours ride). Inside the tent,  a TV showed  the David Millar footage of the climbs, which included a 25% gradient hills (Cote de Goose) and a 6km long slog (10 -12% gradient) which was Hebden Bridge (Cote de Cow and Calf) to finish things off.

As we waited in starting pen for the 6.30 wave – the first of the day – Charly and I were fuelled up and ready for the off. At this point there wasn’t much sight of the wet stuff yet, it was pretty cold at just 6 degrees C and I was regretting not packing my winter jacket with its cosy thermal inner layer.  The first mini climb out of Roundhay Park in Leeds saw groups of cyclists start to speed up. The atmosphere amongst many of the riders was slightly eerie, which meant they weren’t up for a social ride.  It was more a case of eyes down and getting the job done as quickly as possible, before the potentially horrendous conditions hit us.

At around 7am the rain started and it was like what I refer to as ‘sheet rain’ and this was the type of rain that just gets you soaked to the skin almost immediately.  At this point I gobbled a Soreen bar to help pick up the morale which had already started to drop!  Feeling this wet so early on in the sportive was a concern and I decided eating something every 20 mins was a ‘must do’ activity.  I remember specifically thinking I have no idea how I’m going to be feeling at 100km into the ride – considering how crap I was feeling only 10km into it.

Anyway, suffice to say, I got a lot worse and started feeling shivers down my back with the rain somehow reaching every part of my body.  Descending on the bike was really rather scary. The rain was coming so hard, it felt like tiny stones hitting me in the face.  The route was pretty much OK in regards to hills and not too dissimilar to a casual Surrey Hills ride that Charly and I were more accustomed to.  This was of course up until we hit 70k – from that point onwards the route revealed some of the most fantastic (hell raising) hills I’ve seen on a sportive ride.

‘The rain was coming so hard, it felt like tiny stones hitting me in the face.’

Every cloud has a silver lining

The first being Hebden Bridge which was a long 5.5km to be exact, with a 11% gradual increase. It’s one of those annoying climbs that’s just relentless, damaging on your legs and lungs. This climb was also exposed to the countryside and although it could have been a lovely spring day with us smiling looking over the Yorkshire Dales, the reality was that the wind was whistling around the course and made it harder to battle even the most ‘gentle’ of hills.

‘Whilst my quads got tighter and tighter and my heart rate increased to such a level that I could feel it in my throat.’

The second encounter with an upward climb was a much punchier ‘Boy was this going to be a thigh burning one’ – the Cote de Goose.  Staring me in the eye was a 25% gradient of unforgiving tarmac. And although only 1.3km, which might not sound like a long way, the steep gradient meant I wasn’t going to forget it in a hurry.  And nor were my legs. 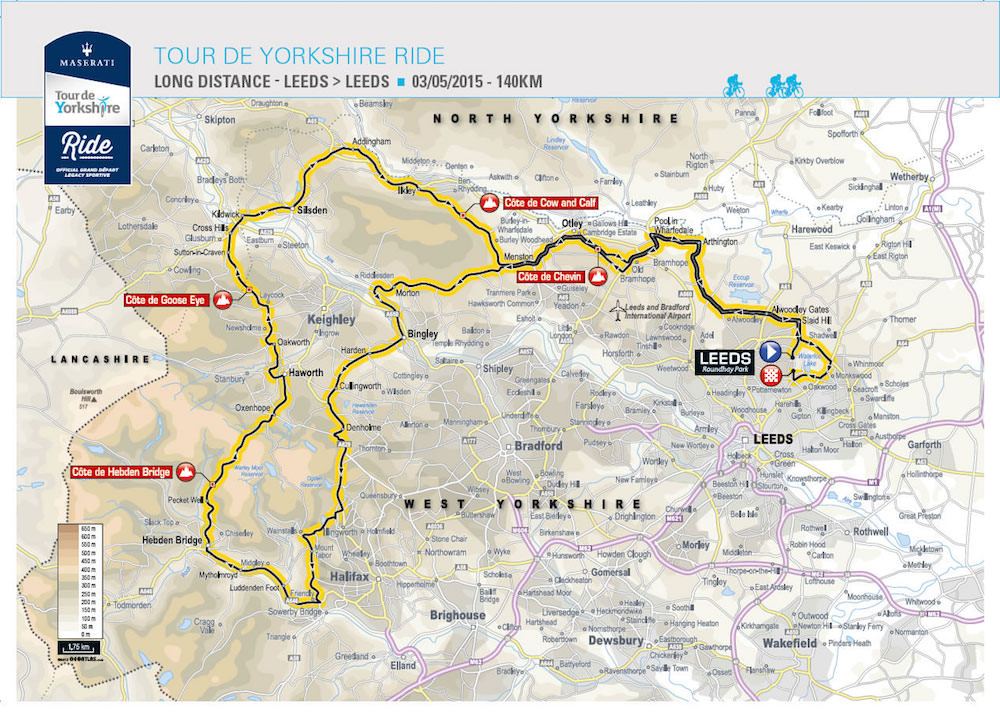 I screeched at Charly that this is a wall of concrete and I wasn’t sure I was actually going to get up it without any kind of assistance from an engine.  Realising I was becoming something of a potty mouth, I was trying desperately not to swear too much nor completely lose my sense of humour, whilst my quads got tighter and tighter and my heart rate increased to such a level that I could feel it in my throat.

It was by far one of the most brutal climbs I’ve experienced and this, coupled with the rain flowing freely under the wheels, was like pedalling through the Amazon.  In fact, it was so steep that we actually saw one guy fall off his bike – I did try to provide some words of encouragement however, since I was in fear of doing the same, I decided to not lose concentration on getting up this ‘God awful’ climb.

Supporters were stood out on the hill, a pained look of concern on their faces, as they watched cyclists huff and puff their way past them.  Thankfully they were more encouraging than my non-existent words and shouted, ‘Keep going,’ or the one my favourite, ‘It’s not that far to the top’ – all the wonderful words you want to hear as you’re busting your gut.

Getting to the top was quite achievement and as a way of trying to encourage my heart rate to resume its normal levels, I took a few deep breaths praying that the climb was the worst we’d experience on the route. (N.B – You could ask why I didn’t look too much into the route before the ride, however my view has always been to enjoy the element of surprise and if you do too much research, then you just fuel the negative mental state of mind in not being able to achieve it at all).

‘Yes, girls can cycle this far too’.

As we passed through some of the most picturesque villages in Dales, our legs beginning to loosen up after the ‘Goose experience’, we were really pleased to see such lovely support from locals.  Some of the comments I seem to remember, ‘Oh wow that’s a girl’.  On those occasions, I was very tempted to respond with a comment like, ‘Yes, girls can cycle this far too’.

But everyone’s smiles and encouragement were well received because often, all you were thinking about was, ‘What in Hell was I doing this for?’  The best part of the whole ride for me was the climb up the cobbles in the village of Ikley. The local supporters were so close to you, cheering you on, giving us a sensation of what it must be like to be in a pro Tour race with people yelling in your ear.  It was really hard at this point to not pedal harder. With people shouting ‘Go on girl’, I really had to grit my teeth and dig deep into those tops of the quads.

The climbs did not stop there, we still had ‘Cote De Cow and Calf’, another iconic climb from the Grand depart route and with the most impressive level of supporters in such miserable weather.  At a gradient of ‘only’ 17%, the legs were now warming up and seemed to just try to grin and bear it.  At the top we had reached the 100km mark which felt like a real sense of relief knowing that we only had 40k to go – which seemed minor distance at the time.  Moreover, the weather eased off at this point and the body temperature was a couple of degrees warmer which made it more pleasurable despite being soaking wet already!

The feed station was not only just your usual flapjacks and cakes, in true Yorkshire style there was Yorkshire pud with sausage which tasted like the best thing in the world and definitely spurred you on to the finish.

We were 10km from the finish when Charly got a puncture which took us half an hour to change (I blame fatigue). At this point, the course was starting to get congested as all three of the routes joined together, providing a great atmosphere amongst the riders, most of whom were all glad it was nearly over.  After crossing the line in 7hrs20 minutes (our actual riding time was 6.53 according to Garmin), the sun eventually graced us with its presence in time to dry us off.  As we rested our bikes up outside the hospitality tent, looking wearily at each other in bemusement of ‘what just happened there?’, we were greeted by the Maserati crew with smiles and words of congratulations.

One question rings bells after an event like this and when the PR guy said to me, ‘Would you do it again?’ I didn’t really have to think twice as I muttered ‘Abso-bloody-lutely’……

For more information on the Maserati Tour de Yorkshire or to enter next year’s ride, go to their website.