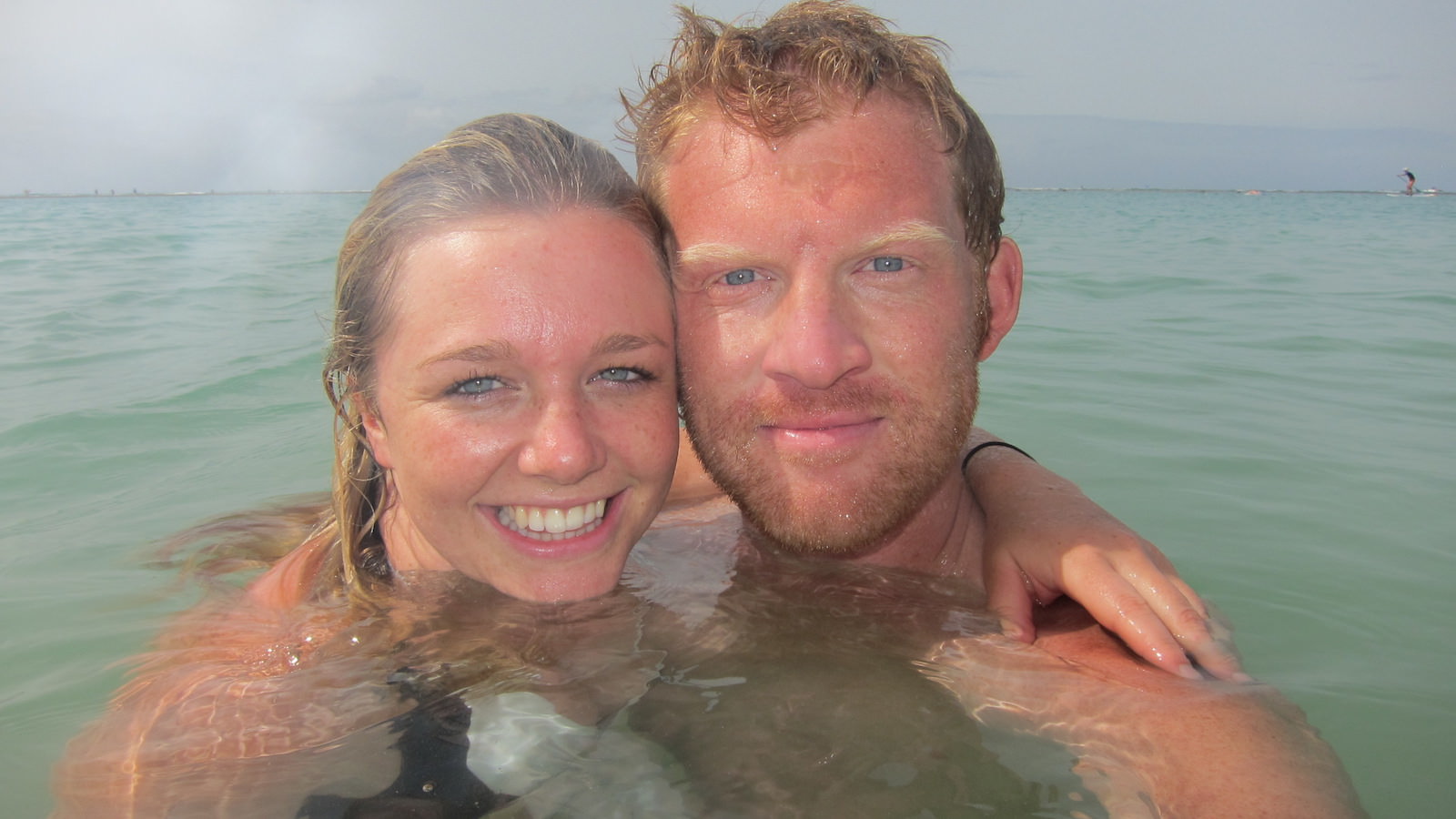 Update: Dave and Emily are ironically no longer a couple, so should you be reading this, some of the info below is

Dave Cornthwaite and Emily Penn are two of my favourite people. They epitomise what it means to live life like there’s no tomorrow. Dave has done some ridiculous things, like skateboard across Australia or swim 1000 miles down the Mississippi, just two examples of his Expedition 1000. Meanwhile, Emily is the Lara Croft of the ocean. As director of Pangea Explorations, she studies the ocean and its challenges in the most remote parts of the planet, from the Tongan islands to the Arctic Northwest Passage. She’s also Yachtmaster and public speaker. Somehow, they manage to find the time to have a relationship – with each other. In part 2 of this series on adventurous couples, read about how they make it work.

As a couple they’ve sailed from Mexico to Hawaii, from Miami to the Cayman Islands, founded the Exploring Mindset Programme and spent two months developing environmentally friendly aspects of a lodge in Zanzibar.

Describe who you are and how you like to be described

How did you meet?  What was it that attracted the two of you to each other?

We met at the Royal Geographical Society at a public event we were both presenting at. At lunch we happened to sit opposite each other. Well, I’d spotted Em that morning and engineered a place opposite this girl who had been impressing everyone. It took about twenty seconds for everyone else in the vicinity to vacate the space, and five minutes later I’d met the first person in years who made me feel lazy. That was that.

Do you argue much? If so, what about?

We don’t argue, we communicate before there’s anything to argue about! The only time things are uncomfortable is in a car with rubbish traffic. Neither of us are the kinds to put up with back seat driving, and as I don’t have a driving licence it’s always Em in the main seat doing the hard work while I’m sleeping.

How are the two of you different?  Is  one of you OCD and the other very laid back? What’s your yin and yang?

We’re pretty similar in many ways. Both workaholics but our own bosses at the same time.

You’ve clearly done lots of things together. How have you supported each other? Who’s the one with the crazy idea and does one of you, more frequently than the other, roll their eyes at the suggestion?

Perhaps I answered this above, but Em’s the eye roller (although I get my moments), mainly because I can’t help a bad (or un-PC) joke, ALL the time.

We’re there for each other wherever in the world we find ourselves. Even if it’s one text a week via a sat phone, knowing our soul mate is out there provides balance. She’s my home, and I’m hers. Which is good, because we don’t have a brick one and haven’t since we met!

What are the biggest challenges in doing adventures with your other half?

Very often we travel separately so haven’t actually spent much adventure time together. It’s certainly a challenge spending so much time apart, which is part of the reason why things work so well when we are together.

We co-lead a twice-yearly expedition on a yacht, where we bring together a crew of people who are ready for a big transition in life. Providing an open, trusting community in a confined space in a remote location takes level heads, so while you’d think this would be the biggest test for both of us, we update the ‘syllabus’ together each day, organically, and it’s surprisingly seamless.

Give me an example of where you’ve had your differences?

I’m interested in how these questions are always looking for issues, rather than exploring how well a relationship can function?!!!

I mentioned the driving above (not that that’s a big problem, we’re in a car together two or three times a year!). In our earlier days there was a natural keenness and curiosity to see how we could work together as a couple, having both led very individual and strange lives for the first phase of our adulthood. Suddenly, finding someone who it must just work with long-term, the focus is on who compromises, when.

Have the two of you been out of your comfort zone – where you’ve had to rely on each other?

Remarkably, not really! We haven’t done any remote journeys together yet and are currently focusing on our individual missions. Plenty of time for joint stuff down the line.

What 3 pieces of advice would you give to aspiring couples looking to be adventurous?

What are your strengths and weaknesses?

I’m impulsive, Em’s the academic. I’m a one man band, she manages a team. I’ll come up with a new idea twice a week and put it into practice immediately, occasionally to its downfall. She’ll bring everything together calmly and see it through to the end.
Em taught me to rationalise my passions, I’m not convinced I taught her anything, but although we spend five or six months a year apart we’re a team and each other’s sounding boards. We understand each other’s unusual lives and share the same values.

If you spend so much time apart, what’s the secret to your success?

I think, 100%, that the key to our success is that we’re able to be 100% us as individuals whether we’re together or not. We’re both in charge of our own schedules so yes, shape plans around each other and there is always some give and take with that, I pull the end date for an exped forward, Em flies somewhere instead of a sail that would take a few more days and thus ensures she misses our window.

I think it also means that we don’t have a chance to get on each other’s nerves. We have that valuable space and time apart, constantly developing, and then we just make the most of the time we have together.

It’s probably not a secret, it’s just common sense, but all I know is that just at the moment when I was thinking that I’d never find someone who could really understand why I’ve chosen to live the way I do, I did find her. And it works perfectly.

Dave is currently undertaking 25 journeys of 1000 miles or more, called Expedition 1000. He’s completed 8 journeys so far. He’s also encouraging people to ‘Say Yes More’. Emily is probably on a boat at the moment. It’s not a bad life!